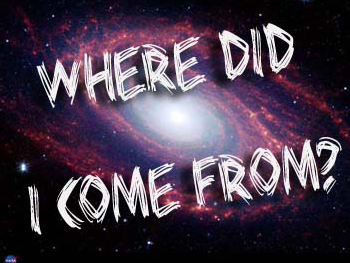 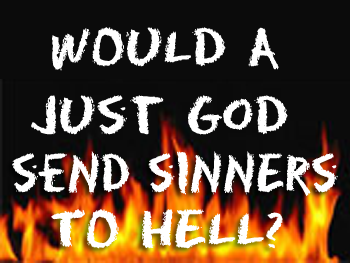 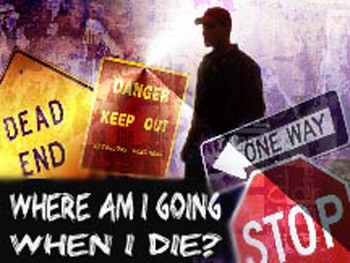 Q: Where Did I Come From?

When all the philosophical and scientific statements are boiled down, we are left with basically two opinions as to where we came from:

Unintelligent Design
Let us consider the second option. Unintelligent Design is the hypothesis that the universe began with a giant (understatement) explosion of compressed matter no bigger than the full stop at the end of this sentence. The “.” exploded with such precision that out of it came an incredibly ordered universe resulting in our galaxy, among millions of others, which have planets rotating and orbiting around a main body, ours being the sun. Let us be clear that such order has never since come from an explosion, and by the laws of probability, will never again come. Scientifically stated, the Unintelligent Design theory is neither observable nor provable, therefore, it is not even qualified to be considered even a theory!

According to the UD idea, out of that Big Bang came life and intelligence. Out of the void of chaos, disorder and nothingness “evolved” beings called humans who are very distinct from every other species on planet earth. They are born into a world that has the perfect chemical makeup to be able to sustain life. Man has intellect, emotion and will, and he also has a conscience by which he can determine morality.

Furthermore, there is something embedded within him that desires to worship a higher being. Not only does Unintelligent Design, commonly called Evolution, defy the scientific First and Second laws of Thermodynamics, it also defies common sense, and should be relegated to books of myth rather than science books. Unintelligent Design is really an unintelligent idea.

Intelligent Design (ID) is based on the reasonable and logical supposition that design reveals a Designer, creation declares a Creator, and the fact that there is intelligence means that there has to be an intelligent source behind it all.

Although ID fails to recognise who the Designer or Creator is, Christians realise that He has declared Himself through the Holy Scriptures, the Bible, and He wants to have a personal relationship with those whom He has created. Simply put, God loves His creation.

Please see article about “Why am I here?” for further discussion on this subject

First Law of Thermodynamics: Matter is neither created nor destroyed. It is merely converted from one form to another. Evolution basically says out of nothing (no Creator, no First Cause) came matter and order. Such a belief is unscientific.

Second Law of Thermodynamics: Everything naturally moves from order to disorder. The common illustration of this is the bedroom or office (it does not clean itself!). The gist of this law is that the universe is winding down. Evolution, contrary to science, teaches that man is at the highest point of the evolutionary chain and the universe evolved to its current state from total disorder. The Second Law of Thermodynamics completely contradicts evolution

Scripture, the Holy Bible, clearly tells us in the Book of Revelation, “Thou art worthy, O Lord, to receive glory and honour and power: for thou hast created all things, and for thy pleasure they are and were created” (Rev. 4:11).

It may be a revolutionary thought to many, but in reality, God placed us here for Himself and not for any other reason. We were created to bring Him honour, bring Him pleasure, bring Him thanksgiving and praise. However, the reality is that for most of us, the thought is completely foreign to us. There is a very good reason for that.

In the book of Genesis, the very first book in the Bible, we are clearly told that God placed Adam and Eve in the Garden of Eden to take care of it. It was the perfect place of Paradise. They had a perfect environment, a perfectly innocent mind, and a wonderful relationship with their God and Creator. However, they like us, were presented with choice. In the middle of the Garden of Eden was a tree called the Tree of the Knowledge of Good and Evil. God had told them “thou shalt not eat of it: for in the day that thou eatest thereof thou shalt surely die” (Genesis 2:17).

Unfortunately, they exercised their freedom to choice for bad, and they plunged the whole world (their offspring) into sin, darkness, death and complete separation from God. Paradise was lost, but not forever.

Man’s choice was that of rebellion against his God. God’s response to man was the Good News.

Q: Would A Just God Send Sinners To Hell?

Ireland was shaken by the unfolding of a horrific story, whereby a 40-year old mother of six was convicted of ten counts of sexual abuse and gross neglect of her children. Under current legislation, though the maximum penalty for men is a life sentence, the district court could only impose the maximum penalty of seven years imprisonment because the legislation concerning women is 100 years out of date.

One in Four, a victims support organisation, immediately called for reform of the current legislation because most believe that justice was not served on that day. The penalty did not match the severity of the crime.

This event illustrates the need for appropriate justice. The justice of God is clearly expressed by the reality of an eternal hell. Matthew 25:41 teaches that hell was prepared for the devil and his angels. Satan is responsible for our being tempted to sin and he is the driving force behind all the evil in the world. It is completely inconceivable that the crimes we read about would escape the notice of a just God, and that He would allow them to go unpunished.

On the contrary, the perfect holiness of God demands justice when crimes are committed against Him (as He views all criminal activity as being against Him). However, there is one thing we must truly understand: God is perfectly just and we, as sinful human beings are not. If we are appalled by crimes like murder, abuse, and violence, how much more is an infinitely holy God. We cannot see things from His perspective until we understand how much He hates criminal activity that the Bible calls sin.

According to the Scriptures, blasphemy, dishonour of parents, lying, stealing, greed, immorality and bowing before statues are terrible crimes against God. The 10 commandments, as given in Exodus 20:3-17, make this reveals this evidence. Romans 3:10 clarifies that all have sinned and all are guilty of these crimes. James 2:10 explains that no one is excluded from guilt. Before we baulk at the justice of God, we must remember that He is infinitely holy and His standard of righteousness is infinitely higher than ours. Perfect justice demands hell for every man but His marvellous mercy and grace has providedsalvation through the Lord Jesus Christ.

Would a just God send sinners to an eternal hell? Absolutely! If He did not, He would fail in His justice. God be thanked though for His mercy and grace whereby He offers forgiveness through the Lord Jesus Christ.

For further information, please see the article, Where am I going when I die?

Q: Where Am I Going When I Die?

Watch some encouraging stories of others who were changed by God